If you have a loved one who wanders, this simple kit can save their life. In an Emergency K9 Tracking teams are the first ones out. Having a good scent sample can speed up the time it takes the K9 to get started and recover your loved one!

In 1910 Friedo Schmidt in his book "Criminals Track and Police dog"  wrote that Scent should be collected as evidence when found at crime scenes and then stored in glass containers, because glass does not accept odors. This idea was taken up in the Netherlands, where in 1919 the National School for Beaver Dogs was opened and an odorological method was developed. In the process, body odor samples were taken from people by means of absorbent materials and stored in glass containers to make comparative studies with the sense of smell of dogs. In the 1980's, the Dutch police used cloth for the first time as odor carrier for the samples.

In the GDR , the police developed the method of odor differentiation , in which sterile rags served as a carrier for the odor traces and this body odor sample were stored in hermetically sealed glasses. Specially trained dogs, referred to as differentiation dogs, were able to sniff a particular sample out of 100 more samples. In the early 1970's, this method
became the first that departments of the People's Police used.

For the Police to be able to take odor samples unnoticed by suspected persons, a chair was designed in which a sterile cloth was stretched on the seat on which the person had to take place. For odor neutralization, the chair had to be cleaned after use with at least 50 ° C hot water. To remove odors from crime scenes, the cloth had to stay in contact with the odor carrier for at least 30 minutes. The fabric was not allowed to be handled with the hands, but only with a kind of barbecue tongs. To compare the odor samples, the opened glasses were placed on the ground at a distance of 80 cm. At the beginning of the search, the differentiation dog got a cloth with the smell to be found. He was then led from glass to glass. The dog sat down in front of the glass, where he recognized the smell to be sought. The odor samples were stored until the case was closed or the offense was time barred. The samples of criminals were kept for up to five years after their release.

The Ministry of State Security ( MfS ) of the GDR took over in the 1970's, the method of odor differentiation from the
police and used them in various departments. Among other things, attempts were also made to determine the sender of letters in the postal check by means of odor differentiation. For such purposes the Stasi had built a smell archive. In the GDR odor traces were not allowed to be used as evidence in criminal proceedings. The method of odor differentiation was used to narrow the circle of suspicious persons. The training center for service dog leaders of the Volkspolizei in the GDR was in Pretzsch . Since 1993, this school has been continued under the name of the service dog school of the state of Saxony-Anhalt

In the Federal Republic of Germany, a so-called smell trace comparison was first applied in North Rhine-Westphalia in
1987/88 . In connection with the protests against the G8 summit in Heiligendamm in 2007 allowed the attorney
general to take breath samples from participants in the protests. The people had to touch small iron bars, which were then stored in plastic bags.

How to Make Your Own Scent Kit. 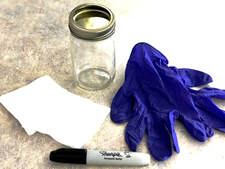 If you have a loved one who wanders, a Scent Preservation kit maybe be the difference between life and death by quickly supplying the Tacking K9 teams with a excellent scent sample. With this simple do-it -yourself kit you can store the scent of your loved one safely and easily. How to do it?

Follow these steps-
​
1) Purchase a clean Mason jar, some rubber gloves and several 4 x 4 gauze pads and a Marker Pen..
2) Open the Mason Jar
3) Put the rubber gloves on!
4) Take the 4 x 4 clean gauze pads and rub them all over the arms, face and chest area of your loved one.
5) Place the gauze pads in the jar and seal the lid.
6) With your Marker put today's date on the Lid of the Jar.
7) Place the sealed jar in your refrigerator and store. This scent sample will last about a year in this condition. When the year is up, simply remove the gauze pads and repeat the above procedure!

If you loved one goes missing simply take the jar out of the refrigerator (do not open, the officer will do that) and give to the K9 officer. He will know what to do next!

If you have any questions or concerns, please hit the Contact Us button to send us an email or click on the chat with us button in the lower right hand corner if we are online we will answer right away!

A great supplement to the scent kit is a GPS tracking device. GPS Tracking devices are a great invention and we highly recommend that if you have a person who wanders or children you want to keep track of, purchase one of these devices. You can shop on many platforms like Amazon to find the price range that you want to work with.